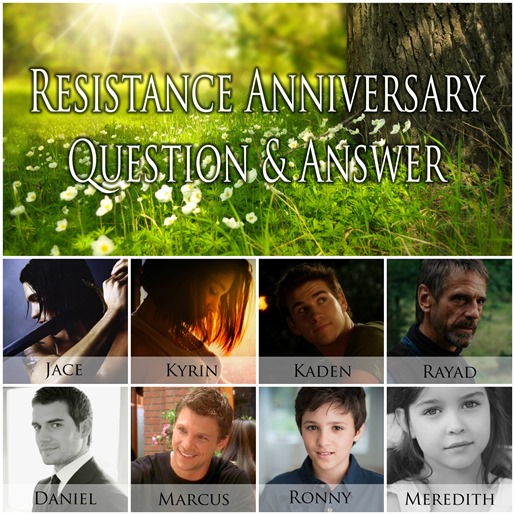 I set my cards aside momentarily to pour myself a cup of the lemonade sitting in a jug by one of the baskets and try one of shortbread cookies before they all disappear. “Mmm, these are good. I can’t eat these in my world.”

“Because the wheat used to make the flour wants to kill me.”

Several of them raise their brows.

“Well, maybe it’s not quite that dramatic.” I shrug. “But I am allergic to it, so I can get pretty sick.”

Kaden looks taken aback by such a thing. “If you can’t have wheat, what can you eat?”

“I find other alternatives, but that’s not very easy.”

He and Talas share a look. I think Kaden’s glad to be living in his world and not have any food allergies. I finish my cookie and brush the crumbs off my hands before gathering the question cards again. Before I can read any of them, something rustles in the brush. Jace looks alert, and the others look at each other. None of them have weapons. After all, I told them this picnic would be perfectly safe. I’m not sure they believe that anymore.

A moment later, a man in earthy clothing emerges from the trees. As soon as everyone sees his face, they relax. I stand up with a grin. “Prince Daniel.” He’s clearly wearing one of his disguises to blend in with the common people.

“Sorry I’m late.” He grins at me. “You have no idea what it took to lose my guards.”

I chuckle. “Don’t worry. There’s still plenty of time left, and some food.”

He glances at the picnic baskets, and I invite him to take a seat. As he greets everyone and picks out some cookies from one of the baskets, I scan my cards. “Since you’re here, Daniel, we’ll get right to some of your questions.”

“So this is kind of a combination of questions I received, but if you were to run away from the palace or actually got disowned, would you have any friends that would help you?”

He swallows. “Well, we established in our last gathering like this that genuine and trustworthy friends are hard to find when you’re in my position. Usually people want to be friends with a prince to gain something. I suppose I might go to Baron Arther’s son, Alex. We were always good friends when we were younger and talked about running off together.”

“Where would you go and what would you do for a living?”

“I’m not sure. Far away from Valcré. I’m not really picky about how I’d make my living. It would be worth it being out from under my father’s thumb. Alex and I did talk about going to sea. It would be a good way to see more of Ilyon.”

I smile. “I could see you two doing that.” I flip to another card. “Here’s a question for you Jace.”

He straightens. He’s probably just started getting comfortable with the lack of questions.

“Kendra wants to know, now that you've flown several times, are you bothered as much by heights? Or is it still a struggle every time you go up?”

Jace glances over at the dragons. “I have gotten used to it, but it’s that I trust Gem than that the heights don’t bother me. I still don’t like heights.”

“Tamara is curious, if you could choose one place to live for the rest of your life, where would it be and what would it be like?”

“The farm. I wish I could go back there. It was always so peaceful and felt safe. I never had anything like that before I met Rayad and he took me there.”

“Speaking of Rayad, before him, was there ever anyone who showed you kindness?” I look at him apologetically. “Sorry, we’re getting to some of the difficult questions again.”

Jace shakes his head. “No. Rayad was the first one.”

“So there really was no one?”

“No. And it’s not that every person I met was cruel, it’s just that, those who weren’t were the ones who avoided me out of fear.”

I quickly look to the cards again, hoping for a question to cheer him up. “Here is a question for both you and Kyrin. What were you both thinking when you went hunting together for the first time?”

They look at each other, and Kyrin chuckles. “I think we were both feeling pretty awkward and wondering what we were thinking by doing it.”

I look at him. “Did you think Kyrin was crazy?”

She smiles at him. “Don’t worry. I thought I was crazy.”

“I just wasn’t something I’d expect a normal person to do.”

“Normal is overrated,” I say with a grin. “If I was normal, I probably wouldn’t be sitting here having conversations with fictional characters.”

I laugh. “Very. So, on the topic of not being normal, Micailah is curious what your special abilities are and why your grandfather took you to Tarvin Hall with Kyrin.”

“I guess because I’m an unusually fast learner. Even though I can’t remember everything the way Kyrin can, I do retain things easily. And I think he just liked the prestige of having two of his grandchildren in Travin Hall.”

I nod. “That reminds me. Amanda asked me what your mother did exactly to Kyrin.” I look at her. “Would you like to explain the reason things were difficult between you?”

“All right,” Kyrin says slowly. “I suppose it started with how things were between her and my father—how she would side with the General all the time. He was never kind to my father. I didn’t really understand any of it when I was still at home, but when I grew older and remembered back, I hated how my mother didn’t defend my father or side with him more. And I guess I always sort of blamed her for us being in Tarvin Hall. I always thought that if she and my father had felt the same, they could have hid our abilities and kept us from being taken.” She shrugs. “I let it make me bitter toward her, which I should never have done.”

Jace touches her shoulder comfortingly, and Kyrin smiles at him. I try to hide my own smile and act casual. “Amanda also has a question for the two of you. Do you love each other, or just as best friends, and have you ever talked about getting married?”

Their gazes both snap to me.

“What? You had to know such questions were coming.”

Kyrin shakes her head, but then smiles mysteriously at Amanda’s question. “Maybe.”

I chuckle. “Is that all you’re going to give them?”

“Well, now seems a good time to ask one of Erika’s questions. She wants to know if any of you want to remain single for the rest of your lives.”

There is silence for a moment before Ronny speaks up. “Girls are weird.”

I laugh, but Meredith has obviously taken offense. Her forehead crinkles in a frown. “That’s not nice. Boys are weird too.”

I bite back my laughter. “Let me rephrase—do any adults here wish to remain single?”

Again, no one speaks until Rayad finally says, “Well, I wouldn’t say I necessarily want to remain single, but I’ve managed all right on my own so far, so I won’t be too disappointed if I do stay single.”

“So has there ever been a woman in your life?”

“I’ve had my head turned a few times, but never anything serious. I was always busy with one thing or another and just never met the right girl.”

“What about you, Kyrin?” I look at her. “Have you ever been interested in someone? Serena adds, ‘besides Jace’.”

She glances at him. “Not really. I mean, I liked Collin, but not like that. There just wasn’t anyone who was very kind at Tarvin Hall. And even when Kaden and I were out and about in the city, I never met anyone I had a real interest in.”

“Jace, what would you do if someone started hitting on Kyrin?”

He shifts and clears his throat. “Depends on how they were acting.”

I smile. “You’d probably just give them a look and they’d back off.”

“And Kyrin, Kendra wants to know what would your dream wedding look like and what do weddings look like in Ilyon?”

I shrug. “Those are the questions.”

She takes a breath. “Well, weddings depend on your station. They can be grand affairs or simple family gatherings, depending on who you are. They’re not much different than weddings in your world. Personally, I would like a small, intimate wedding with only family and close friends.”

I notice how Jace appears to be listening closely while trying not to look like it. “So, Kaden, would you let Jace marry Kyrin?”

They all look at me with wide eyes.

Kaden chuckles, and looks at his sister, who is blushing a bit. He speaks in a teasing tone “I don’t know . . . I’m just not sure they’re quite right for each other . . .”

She smacks his arm and looks at me. “Why don’t move on to the next question?”

I try not to laugh. “I’m not sure this one is all that much better. Ysa wants to know, if Kaden were to wind up with nieces and nephews, what would your first reaction be?”

Kaden can’t resist giving Kyrin another teasing grin. “Oh, I’d love to have nieces and nephews.” He nudges Kyrin. “So you better get on that.”

She smacks him again. “Marcus is sitting right here. Why don’t you pick on him?”

Kaden and Marcus both laugh, and Kaden adds, “Better hurry and find a girl, Marcus.”

“You too,” Marcus responds.

I shake my head and laugh at their antics and then start reading a new question from Ysa. “If they can't have gunpowder, can we introduce the guys (aka Kaden and Trask) to nitroglycerine?” I pause, hoping neither of them were paying attention, but Kaden perks up.

I quickly shake my head. “Nothing, never mind.”

He looks suspicious. “What exactly are you hiding from us?”

“Could it save our lives?”

“And you’re still going to keep it from us?”

“It’s not part of your story.”

“Of course some of you make it.”

I give him a look. “Now you’re just trying to cause trouble. Let’s move on, shall we?”