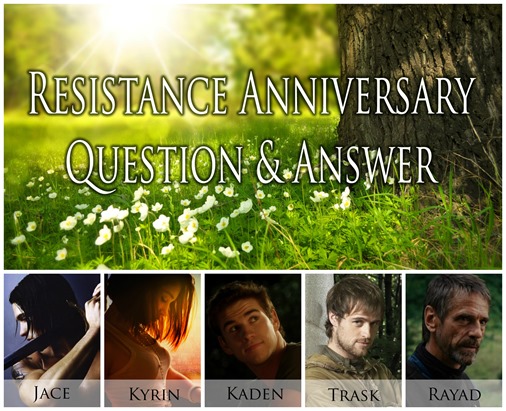 I fly over a lush mountain meadow on a sapphire and black dragon and land near a river. Huge weeping willows grow along the bank, making it an ideal spot for a springtime picnic. I slide off my dragon and gather the supplies I brought with me. Stepping under one of the willows, I spread out a few blankets on the edge of the river and set out the baskets of food. I sit down to wait as my dragon suns herself nearby. I don’t have to wait long. Her happy trill alerts me to the approach of other dragons. One by one, several of them land nearby—some slate blue and white and others green and black. I smile as their riders dismount, and Jace, Kyrin, Kaden, Rayad, and Trask walk toward my picnic site.

“Welcome,” I tell them. “I hope you like the spot I picked.”

They look around and seem satisfied, but Kaden quirks his brow as he looks at me again. “I thought you said we wouldn’t have to do this again until your next book release.”

“Uh . . . well.” I give him a sheepish look. “That was before I realized I was going to have this month long anniversary celebration. It’s kind of a big deal, after all.” I feel the need to look over at Jace and say, “Sorry.”

He shrugs. “After last time, I’m starting to get used to it.”

“I don’t think it will be quite as difficult as last time,” I assure him. “But I do want to congratulate you all. Your story has been out in the world for one year now. I know it’s kind of overwhelming, for some of you at least, but you’ve gained a LOT of dedicated fans in that time. That’s partly why I’m doing this. You know how much they enjoyed our last sessions. “I gesture to the blankets. “Why don’t you sit down. There’s food to snack on. The Goodreads Girls sent along a bunch of desserts as consolation.”

Kaden grins at the prospect as they take seats on the blankets. He lifts the lid of one of the baskets to peek inside.

I give him a look. “Just make sure to save some for when the others show up later.”

I take all the question cards from another basket and sit facing them. “As long as we’re talking about food, we’ll start off with some food questions. Jace—”

Kaden nudges Jace with his elbow. “Notice how she always starts with you?”

I shake my head. “What? He usually has the most questions. Now, as I was saying, Jace, what is your favorite food?”

“I like good, home cooked meals.” He glances at one of the baskets I packed especially for him. “But I think I’d have to choose shortbread cookies as my favorite.”

I nod. “And readers will soon know why that is once they get to read Half-Blood.” I switch my attention to Kaden. “Stargazer wants to know what you’re favorite dessert is.”

“The mint chocolate chip with crumbled shortbread on top?”

“Amanda did. She says she’s sorry for all her questions and loves you all.”

I laugh. “Of course you will.” I flip to my next card. “Rayad, I don’t believe you were part of our last Q&A sessions.”

“Well, there are a couple of questions for you this time. Merenwen wants to know what made you want to follow Elôm?”

“That would be my parents.” A reminiscent smile comes to his face. “They were strong believers and raised me well. My father was particularly influential. I respected him a great deal.”

“Is there anything that makes you doubt Elôm?”

Rayad looks thoughtful. “I had some moments of doubt when I was younger. Most people probably do, but I’ve experienced so much over the years that I’m completely assured of His plans.”

I nod. “One of the benefits of age.” I look down at the cards. “So, Trask, Stargazer wants you to pick your favorite mode of transportation: horse, dragon, or pickup truck?”

He laughs. “You can’t really compare a dragon to a pickup truck. I’ve always loved horses, but it’s pretty hard to be traveling with a dragon, so I’d have to go with dragons.”

“Yeah, that is a tough choice. I love both too. Speaking of animals,” I look at Jace, “Stargazer wants to know if you ever wanted a saber-toothed tiger as a pet? Actually, what none of my readers know yet is that wildcats in Ilyon are very similar to saber-toothed tigers, so this question isn’t implausible within the realm of the story.”

Jace thinks for a moment. “I haven’t considered having one as a pet, but I wouldn’t be opposed, depending on the situation.”

“Kendra wants to know if you ever adopted any other pets besides Gem and Tyra.”

“When I was younger, I had a jay named Strune. I guess you could say he was a pet.” Jace pauses. “But I can’t say much more than that since it would give too much away.”

“Readers will have to wait until Half-Blood comes out to learn more.” I switch my attention to Kyrin now. “I’ve got a question for you from Amanda. Do you like living in the woods, or would you rather live somewhere else, providing it was completely safe, with your friends and family?”

“I love living near the woods too,” I agree. “I also had spectacular adventures out there with my brothers. Here’s another question from Amanda. Do you consider yourself an introvert, extrovert, or somewhere in the middle, like she is?”

“I’m definitely more introverted, but I’m used to being around a lot of people after living in Tarvin Hall. Still, I prefer more one on one interaction than large groups. Kaden’s better at that than I am.”

“That’s a lot like me and my middle brother, although I’m still a bit more introverted even than you.” The sound of wings draws my attention. I smile. “Looks like some of the others have arrived.”